The journey of Falmouth’s oldest hotel…

The Greenbank Hotel started as a private residence and dates back to at least 1640. Later, the beautiful building became an inn. Because of its perfect position across the river from Flushing village, it was used as the drop off and collection point for the Flushing Ferry (which still runs today, from the Prince of Wales Pier.) It was common practice for the ferry to be operated by the keeper of the inn. This was an interesting arrangement that could provide a good custom at the bar but an infrequent service for the passengers!

In June 1785, the Sherbourne Mercury carried an advertisement stating that “a commodious dwelling house known as The Ship Inn, Falmouth” was for sale. The hotel later became known as the Kings Arms Inn. 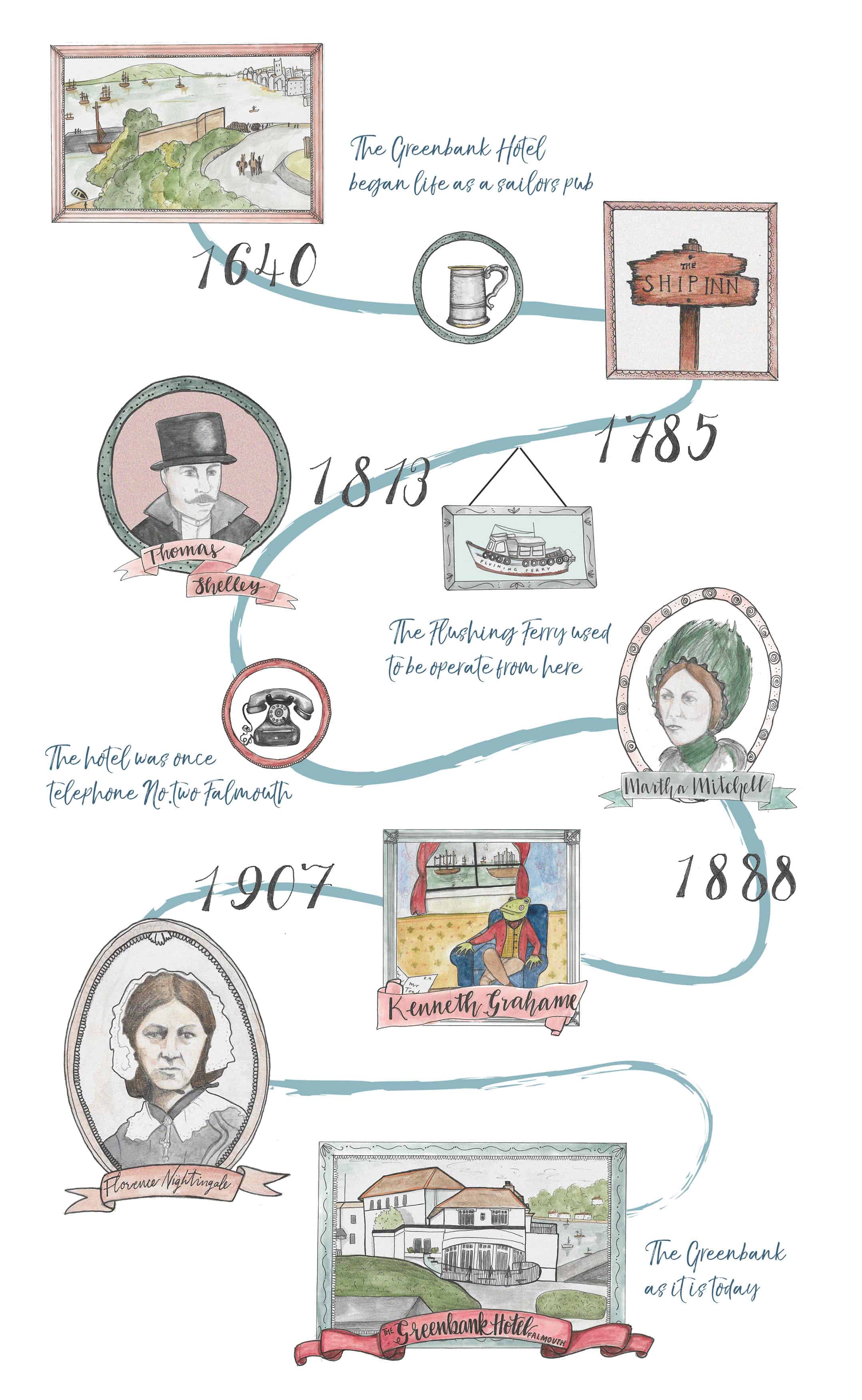 Mr Thomas Selley became the new proprietor in 1813, taking over from James Rogers. He made it into a gentleman’s residence where the Packet ship captains stayed.  During those years, the hotel was an important stop for coaches leaving for Plymouth, Exeter, London, Bath and Bristol. It became known as the “Commercial Packet Hotel, Greenbank” and as such advertised “as consequence of the reduction in the price of forage, I am able to post from Falmouth to Exeter at one shilling and threepence per mile”.

In 1841, at the not so old age of 60, Mr Selley sadly died. His family were succeeded in 1869 by John Hoskin Mitchell, followed by his daughter Martha Mitchell upon his death in 1888.  She enjoyed a long reign at The Greenbank.

One of the claims to fame of The Greenbank Hotel is that in 1907, Florence Nightingale stayed here. Her name in the guest book is on display in reception. Our beautiful Florence Suite pays homage to our famous guest. Additionally, Kenneth Grahame stayed at the hotel between the spring and autumn of 1907. It was here that he wrote letters to his son. These later formed the stories for The Wind in the Willows.

These days The Greenbank Hotel is an amalgamation of buildings. The most recent is the Riverbank wing where the Riverbank Suite is located. The present owners of The Greenbank took over in November 1999 and went on to complete the renovation started by the previous occupants to make the hotel into what you see today.

We do hope you will find the time to experience it for yourself.